One of the often overlooked aspect of a restaurant business is the quality of water used in cooking and in washing every ingredient served fresh to customers. 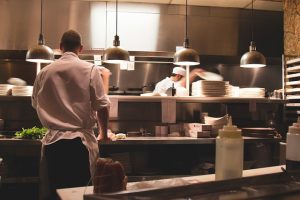 Nowadays, adding a water filtration system in the kitchen is quite important. Doing so minimizes the exposure of the food and beverages being prepared and served, to the harmful contaminants present in tap water, particularly the microorganisms.

Now here’s the thing, even if the tap water supplied by the utility company undergoes treatment protocols, keep in mind that the treated water still passes through storage tanks and pipes that may contain different kinds of pollutants and toxic substances.

Waterborne Diseases and the Threats Posed by Biofilms

The United States Centers for Disease Control (CDC) recently reported that waterrelated diseases is now common in the US. The latest estimate in the number of people that were hospitalized after contracting a waterborne disease is now 7.2 million people

. The CDC warns that drinking unfiltered water taken directly from the faucet is not advisable because many of the most serious cases of waterborne diseases were results of the biofilms thriving inside the pipes of aging water systems.

What Exactly are Biofilms

Biofilms consist of one or more species of microorganisms such as fungi, bacteria or protists, growing collectively on various surfaces of moist environments. Microorganisms can form anywhere by attaching themselves to the surface of a particular object by secreting a glue-like slime so they can thrive and propagate.

Biofilms commonly occur in pipelines, water tanks, rocks, boat hulls and even in hot water springs, which makes the area very slippery. They can also build up inside the human body by attaching themselves to implants and to the body organs. If a biofilm consists of pathogenic bacteria, it can become a major cause of chronic illness. Biofilms occurring in kitchens or in areas where food processing activities take place, can be a persistent cause of food contamination transmissible as a disease.

In a restaurant, the food preparation area can be rid of contaminants by installing a reliable water filtration system to keep the water used for cleaning, washing and cooking clean and free of contaminants, especially those that cannot be seen by the naked eye. Such contaminants eventually become visible once they form into biofilms attached and appearing in grooves and crevices of the sink, the faucet and on the underside of countertops and other places where they can thrive and reproduce without being disturbed.

There are actually several types of water filtration systems available, ranging from the simplest water filter pitcher to the built-in types attached to the faucet either above or under the kitchen sink. Since the goal of installing a water filtration system is to prevent contaminated water from spreading microbial contents to the kitchen appliances, cookwares, dinnerwares and other utensils used in the kitchen, the built-in type would be the most suitable.